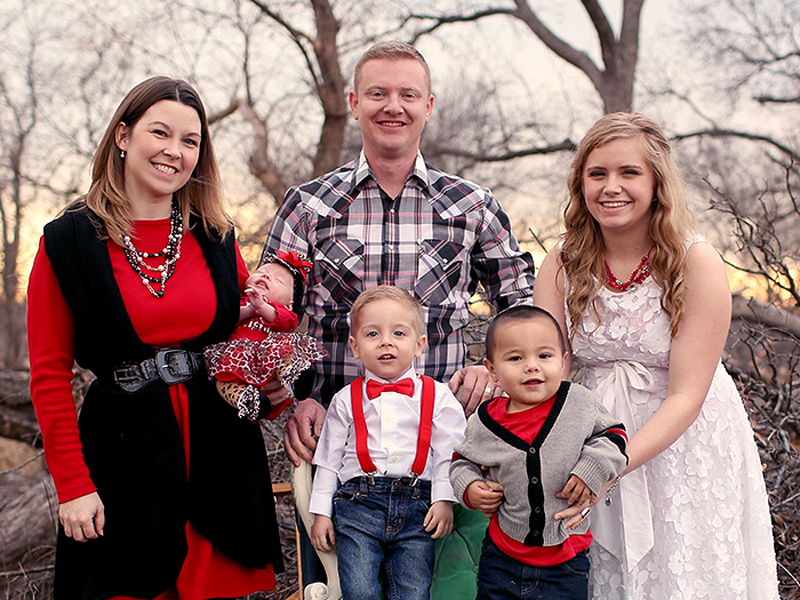 None of the treatments were working. According to the doctors, there was no medical reason why they couldn’t get pregnant. But Valarie and Evan Maier were trusting in God’s plan and His timing.

The Maiers began looking into adoption but quickly discovered that the cost of a traditional adoption was prohibitive for them. Then a friend, who was a foster parent, explained how inexpensive it was to adopt a foster child and how the state even pays for the child’s support while they are in foster care.

“We decided that while we were waiting to see if the Lord would give us our own bio child…we could give one of His kids a home,” said Valarie.

Valarie and Evan were attending a CPS meeting where they heard about a lot of different foster care agencies, but Arrow’s foundational scripture resonated with them. Psalms 127:3-4 says “Children are a gift of the Lord…like arrows in the hands of a warrior, so are the children of one’s youth.” For them, confirmation they found the right agency was when they met the Arrow staff. Valarie said, “We just loved the people. They were wonderful!”

The Maiers desire was to foster one child who was 6-years-old or younger. So when their first Arrow fostering experience turned out to be providing respite care for two African-American sisters, one of which was 8-years-old, the Maiers realized their vision was too narrow.

“It didn’t make any sense,” said Valarie. “Why are we putting parameters on what God can do? So we said we’re just going to be open.”

Valarie and Evan grew to love the young sisters, so much so that they tried to adopt them twice. Even though they were being considered, ultimately another family was chosen. Their trust in God’s plan and His timing remained strong.

The first foster child to be placed into their care was Vaughn, a newborn whose drug addicted mother was going into rehab for several months, and his father became incarcerated.

Ironically, just days before Mother’s Day 2013, Vaughn’s parents relinquished their rights. Vaughn’s mother told a case worker that she didn’t think she could make it on her own with him. She also expressed how thankful she was for the good care that Vaugh was receiving, and how she wanted him to stay with the Maiers. During a court proceeding, when Valarie and Evan just happened to be in the room, Vaugh’s father told the judge he couldn’t take care of himself, how could he care for a child.

Finally, through Vaughn’s adoption at 15 months old, this loving couple had become what they prayed for…a loving family. But the Maiers were about to experience Ephesians 3:20 which says that God “is able to do immeasurably more than all we ask or imagine, according to his power that is at work within us…”

Less than two weeks after Vaughn’s adoption, Valarie received a call from Arrow asking if they would be open to another placement, a 6-month-old boy named Jace. Valarie and Evan enjoyed plenty of bonding time with Vaughn before his adoption, so the answer was “yes.” But Valarie had the same questions she had asked when they took Vaughn into their home, “What’s the situation with the bio mom…is this a long-term placement or do we have any idea?”

The answer shocked her. Jace’s mom was 14-year-old Ashlyn, whose mother was living with a possible sexual predator accused of raping one of Ashlyn’s school friends, and he was on the run from police. But Ashlyn wasn’t being removed because there wasn’t a group home who could take her. Valarie asked if they were actively looking for a home for her, the surprising answer was “Not at this time.”

Valarie wanted to take Ashlyn and her son Jace, but their license wasn’t adequate. The Arrow staff helped Valarie and Evan get everything taken care of in less than a week so they could open their home to Ashlyn and Jace.

Valarie called Ashlyn and asked if she was planning on raising Jace, or if she thought it might be too much for her to handle. Ashlyn was emphatic that Jace was her son and she was going to raise him. She said, “This is not my fault. I don’t have a job, and I can’t get a job because I just had a baby.” At this point, Ashlyn was an 8th-grade dropout with a six-month-old baby to raise.

After the state placed Ashlyn and Jace with the Maiers, it wasn’t long before Valarie was able to get Ashlyn back in school, partly because of a wonderful teen mom program the school offered. The school bus would pick up Ashlyn and Jace, take them to Jace’s daycare where Ashlyn would check him in every day, then the bus would take her on to school. After school, Ashlyn rode the bus back to pick up Jace before going home.

“She got him dressed every day, she fed him every day, and we did our very best to make sure she understood the difficulties she was facing as such a young mom,” said Valarie. “Their placement in our home came with the condition that we supervise her parenting efforts. But if she wanted to parent, we were going to allow her to be a parent.”

Ashlyn had been to church a few times in her life and had even accepted Christ as a child, but she never really understood what it meant to be a follower of Christ. Through Valarie and Evan’s strong faith example, and Ashlyn being able to attend church on a regular basis, it wasn’t long before she developed a true relationship with Jesus, even if it did start out a little rough. At the beginning, she begrudgingly attended church, assuming everyone would be judgmental and condemning. Instead, she was embraced and loved by everybody. They even started a single moms group to minister to Ashlyn. One of the focal points of the ministry is called Embrace Grace, which is a combination baby shower and “princess day.” Older ladies in the church cook food for the event, and bring baby gifts, while the young moms get all dressed up so they can see themselves as the Lord sees them – pure and whole, and completely spotless.

After about a year with the Maiers, Ashlyn’s parents relinquished their rights, which presented Ashlyn with multiple options. But because she didn’t have a job and couldn’t support herself, emancipation wasn’t one of them. She could continue in foster care with the Maiers, or they could adopt her. Or she could move to a group home that would take teen moms. Ashlyn said, “I want Jace and me to be a family. And I need a family because I need help.” Ashlyn chose adoption.

In December 2014, Ashlyn’s adoption was finalized, and the state dropped Jace’s case since he and his mom were now in a stable home environment. Not only did Valarie and Evan have Ashlyn as a new daughter, but they also had Jace as a new grandson. But the biggest surprise of all happened just three months earlier when Valarie gave birth to their newest daughter, Meridian. With three kids under three-years-old, “It was a party at our house all the time,” said Valarie.

Having experienced the placement of two babies in their home, and having to scramble to purchase all the baby things they needed, Valarie and Evan decided to start FAM (Foster & Adopt Ministry) to provide the things foster families need for an infant placement. They maintain a clothing closet with prepacked bags of clothes for all different children’s age groups and sizes, plus they provide things like baby beds, bouncers, and walkers. Valarie explains, “Our goal is to fill the gap between the phone call for placement and the child arriving. We bring the practical things the family needs so they can have time to bond and not have to run to the store on day one.”

Valarie’s passion for helping foster kids also led her to train to be a CASA volunteer to advocate for foster children in court. And she continues to encourage others to foster, “Many times I’ve shared with people, anytime you sit at the dinner table and there’s an empty chair, or you walk down the hallway, and there’s a bedroom with no one sleeping in it, that’s an opportunity that’s being missed to witness to and love a child. And they haven’t done anything wrong. It’s the parent’s fault this kid needs help, so help the kid!”

Today, Ashlyn is a high school graduate, she is employed, and Jace is in school, and they have their own apartment. The desire of Ashlyn’s heart is to help other kids who go through the same type of turmoil she has overcome, so she is currently considering her college options in order to pursue a career in counseling.

Ashlyn and Valarie have a fairly typical mother-daughter relationship. “She probably calls me five times a day,” says Valarie. “It’s great! She’s my daughter…it’s just how it is!”

Once again the evidence is undeniable…God’s plan and His timing are perfect.

previousAdopted at 8...today she's a young woman with a heart to serve others